UK Landlord avoided guarantee restrictions by opting for a bond

Paragon Community Housing cashed in on low gilt rates to raise £250m at an all-in cost of 3.625% last Wednesday. The spread over gilts - the price minus the cost of government borrowing - was 1.4%.

However, a day later Devon and Cornwall Housing (DCH) used the Affordable Homes Guarantees Programme (AHGP) to borrow £52m at just 2.365%, the cheapest ever long-term debt in the sector.

Paul Rickard, finance director at Paragon, said the landlord had opted to issue an own-named bond to allow it to use the cash to refinance debt and value properties at a higher rate.

‘The guarantees fund has to be used for new housing,’ he said. ‘The covenant security is also more restrictive under the guarantees programme and we didn’t want to place any constraints on future capacity.’

However, Piers Williamson, chief executive of The Housing Finance Corporation (THFC), which administers the guarantees programme through its subsidiary Affordable Housing Finance (AHF), said: ‘We’re currently working on a deal where a landlord wants to do some refinancing, but they have separated off the funds for development and they are using guarantees for that aspect.’

Under the guarantees programme, landlords have to provide 115% security from stock valued at Existing Use Value Social Housing (EUVSH) - the sum total of rent receipts over a number of years.

However, when raising money independently, landlords can use Market Value Subject to Tenure (MVST) which values properties higher, based on their open market sale price.

Mr Williamson said AHF is ‘batting away’ at trying to get the government to accept MVST for the guarantees programme, but it is reluctant.

‘The implication of MVST is that they would be prepared to sell the properties on the open market in extremis – which isn’t a message which sits well with government or civil servants,’ he said.

Adrian Bell, head of debt markets UK for Canaccord Genuity, said while Paragon had secured ‘a very impressive deal’ it was ‘difficult to understand why borrowers would not use AHF when they had the opportunity’.

‘A difference of 0.5% in interest costs makes a real, significant difference over the life of a deal,’ he added. 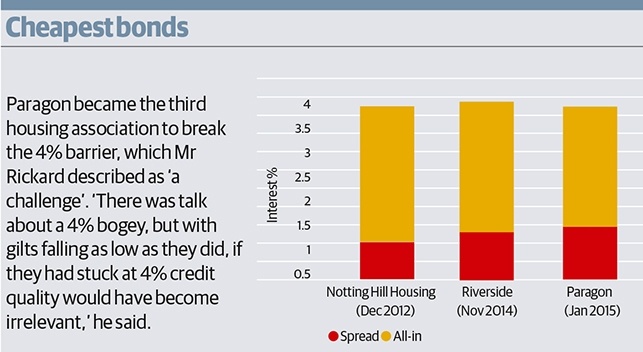